Meet the experienced and friendly doctors and staff who make Barrow Eye Center, PLC the leading provider of vision care products and services in Russellville, Kentucky. 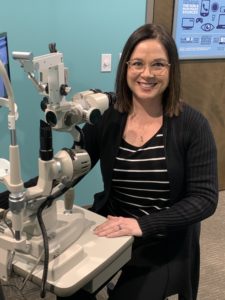 Dr. Barrow is a native of Logan County and a graduate of Logan County High School. After completing her studies at Murray State University in Biology and Chemistry, she was accepted at Southern College of Optometry in Memphis, TN. She graduated in 1998 and was awarded membership in the Beta Sigma Kappa International Optometric Honor Society. In October 1998 she opened her practice, Barrow Eye Center, PLC, in Russellville, KY. Dr. Barrow was awarded the Kentucky Young Optometrist of the Year 2000 to 2001 and served on the Kentucky Optometric Board of Trustees from 2005 to 2007. She currently is a member of the Logan County Health Board and is the treasurer for the Kentucky Eye Care Alliance. She is an active member of New Friendship Baptist Church in Auburn, KY, and is married to Jon Barrow with two children Macon and Chaney. 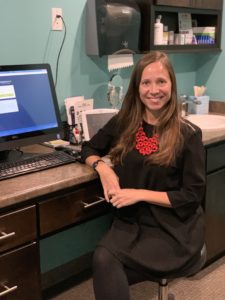 Dr. Amanda Higdon is a native of Grayson County and a 1998 graduate of Grayson County High School. She graduated from the University of Louisville with a Bachelor of Science in Biology. After graduating from the University of Louisville, she attended Southern College of Optometry in Memphis, TN. As a student she was awarded outstanding clinician her fourth year and received membership into the Golden Key Honor Society. Since her graduation in 2007, Dr. Higdon has been working at Barrow Eye Center. She is a member of the AOA and  served on the Kentucky Optometric Board of Trustees from 2010-2013. Dr. Higdon and her husband, Dr. Justin Wilkins, reside in Franklin, KY, with their son, Austin; and daughters Molly and Abigail. 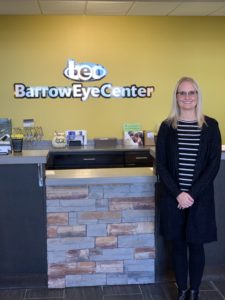 Erica is a native of Logan County and has been at Barrow Eye Center since February 2008. She also has over three years of experience working for a former optometrist. Erica is a Certified Paraoptometric and has an Associates degree from Western Kentucky University in Applied Science. She primarily works in the lab and helps patients in selecting eyewear, and also assists the optometrists when needed. When not at work Erica enjoys spending time with her husband, Bryan, and their two daughters Alexis and Emma. 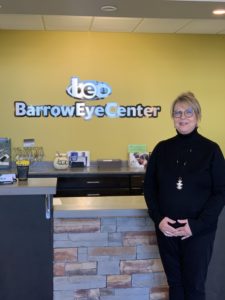 Jeanie has been with Barrow Eye Center since 2003 and has been a Certified Paraoptometric since 2004. She works in the lab and with patients selecting the proper eye wear and in choosing lens options that best fit the patients’ prescription needs. Jeanie is a native of Muhlenberg County and has lived in Logan County for 40 years with her husband, David. She enjoys spending time with her family. Jeanie and David have two children, Zak and his wife Elizabeth, and granddaughters, Lucy and Ruby; Jennie and her husband, Corey, and grandsons Blaine and Brayden. 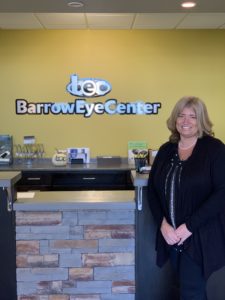 Janet has been working at Barrow Eye Center since August 2009 as a receptionist. Her primary responsibility is scheduling appointments, making referrals, and checking out patients. She is a graduate of Logan County High School and attended Hopkinsville Community College and graduated with an Associates of science degree. Janet and her husband Wesley have two children, Weston and Anniston. She has always lived in Logan County and loves working in her hometown. When not at work she enjoys spending time with her family and friends, singing at church, traveling, and shopping. 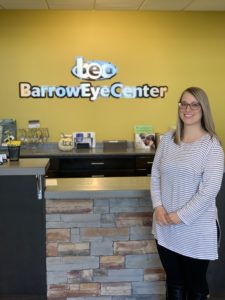 Katie is native of Logan County. She graduated from Logan County High School in 2006 and from Western Kentucky University in 2008 with a degree in Health Information Management. She joined the Barrow Eye Center team in July of 2014 as the accounts administrator. Her responsibilities include insurance billing, assisting patients with billing questions as well as answering phones and scheduling appointments. Katie married Martin Keith in May of 2014. They have two sons, Aiden & Owen. 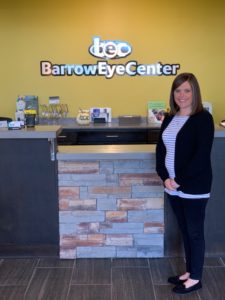 Rhonda is a native of Logan County and has been a member of the Barrow Eye Center team since November 2010. She primarily performs patient work up and assists the optometrists with any additional testing or procedures. She is also responsible for all of the contact lens ordering. She is a 1994 graduate of Logan County High School and attended WKU. Rhonda and her husband Jason have three children; Jacob, Blake and Haleigh. When not at work, Rhonda enjoys spending time with her family and friends, traveling and watching her kids play sports. 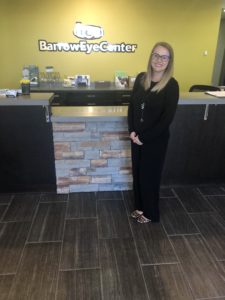 Brittany is a native of Logan County and has been a member of Barrow Eye Center since December 2014. She primarily works in the lab, helping patients select the eye wear that best fits their prescription needs. She also helps out with work up and special testing when needed. She is a 2008 graduate from Logan County High School and attended Bowling Green Technical College. Brittany and her husband Zach have been married for 6 years and have 1 daughter; Everlee Grace and 1 son; Grayson. When not at work she enjoys spending time with her family and friends, traveling, and attending church. 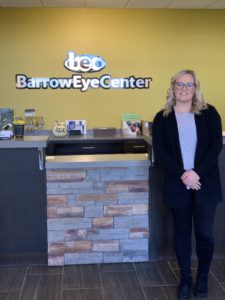 Hannah is a Logan County native and has been with Barrow Eye Center since May of 2017. She works primarily in the lab helping patients choose the best eye wear; and also helps work up the patients when needed. She has an associates degree in applied science and arts from SKYCTC. She married her husband Davis in October of 2019, and now resides in Auburn with their two dogs; Lilly and Cooper. Hannah and Davis enjoy traveling and spending time with their friends and family. 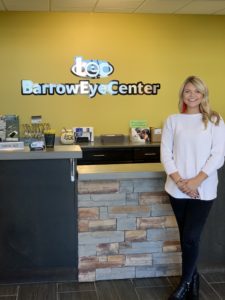 Haley is a native of Franklin, Kentucky and started at Barrow Eye Center in May of 2019 as a front desk receptionist. Her primary responsibility is scheduling appointments, making referrals, and checking out patients. Haley graduated Lindsey Institute in 2016 as a licensed cosmetologist. She now resides in Lewisburg, Kentucky. She enjoys spending time with her friends and family, shopping and traveling.

Teresa is a native of Logan County. She previously worked for Barrow Eye Center for 2 years in 2007 before moving to California. She recently moved back and has been a member of the team since August 2019. She primarily works as an Optometrist Assistant, performing patient work up and any additional testing or procedures needed. She is a 2006 graduate of Logan County High School. Teresa and her husband Andrew have been married since 2011 and have 1 son Aaden and 1 daughter Abigail. When not working she enjoys playing catan, spending time with her family and friends, and attending church.

You can schedule your next eye exam with us online!